FinancialEdge Breaks Ground on Next Phase of Special Partnership 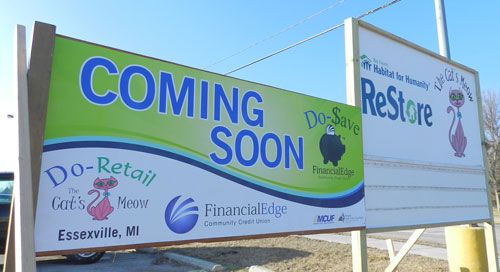 ESSEXVILLE, MIch. – FinancialEdge Community CU is starting the next chapter in its innovative partnership with a local nonprofit that employs people with disabilities and other barriers to employment.

The credit union will build a new branch – called Do-$ave – inside one of Do-All Inc.’s retail stores that will be staffed, in part, by Do-All trainees.

This is the second phase of FinancialEdge’s partnership with Do-All. Last fall, the Bay City credit union opened a Do-$ave branch that is only open to Do-All trainees and staff at the nonprofit company’s main facility in Bay City.

Now, FinancialEdge is taking the next step with a branch that will be inside Do-All’s largest store on Center Road in the neighboring town of Essexville. This store will be open to the general public when it is completed in the fall.

FinancialEdge Marketing Manager Pam Swope, who is spearheading the project, said the branch initially will be open one day per week.

“We’ll grow the hours as we need them,” Swope said.

Swope said previously that the credit union hopes to reach a segment of the population that currently has limited access to financial services, but already frequents the thrift store where the branch will be located.

FinancialEdge has worked with trainees from Do-All, which is one of its SEGs, for years, but the idea for the branches came from Do-All President and CEO Chris Girard, who was looking for new opportunities for the trainees who are employed by the company.

“I get choked up because it takes (the partnership) to the next level,” said Girard, whose family has been involved in Do-All for three generations.

“This partnership is really growing the community together,” he added.

“We hope this will be a model for other credit unions to do this in other locations around the state and the country,” Coberley said.

The credit union will build the branch in part of a triangle-shaped room at the front of the store. Do-All trainees will be involved in the buildout.

It will have a gate across the entrance for when it is closed, allowing shoppers at the thrift store to see inside the credit union branch, which Swope said will offer most of its regular services at the new branch.

It will typically employ two Do-All trainees along with one Do-All staff coach and a credit union representative.